Trending
You are at:Home»Comparisons»Sorry Apple, but everyone thinks Microsoft won

By Sadeq Qasem on October 29, 2016 0 Comments
his week Microsoft and Apple went head to head in an epic battle to win the hearts of technology buffs everywhere.

Microsoft announced it would be holding an event on Wednesday, and naturally, its competitive frenemy, Apple, chose to host its MacBook event the following day.

Though Apple has a reputation for dazzling fans with impressive events, many people felt it was Microsoft that came out on top this time around.

For Apple’s main event, the company unveiled a new Touch Bar on Macbook Pros. Though captivating and full of emoji, the feature was simply added to the current stable of laptops.

Microsoft, on the other hand, introduced several innovative products like the Surface Studio and Surface Dial, Microsoft Edge and AR/VR Headsets.

After watching the back-to-back hardware events, people flocked to Twitter to passionately declare Microsoft the winner.

If I were running Apple, I would get busy on the next great thing. The PC wars are over. Done. Microsoft won a long time ago` Steve Jobs 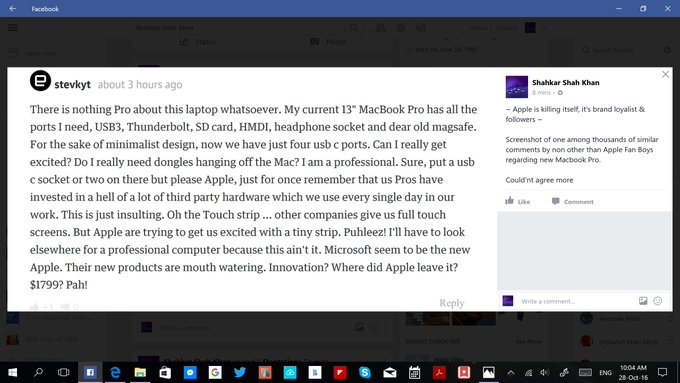 Im sorry apple your puny rubbish little new mac book has lost this one. The surface studio has won. https://youtu.be/BzMLA8YIgG0

When Microsoft announces the Surface Studio and Apple is here with their Macbook Pros. I think we know who won here xD

Microsoft topped Apple and the tech journalists won’t accept it.

Microsoft won this week. Their products show ambition and beauty. Apple falls flat. Not impressed at all.

Though it was difficult to admit, the two events even caused some die-hard Apple fans to switch teams.

Hate to admit but I think @Microsoft won the day!! @Apple#appleeventhttps://m.youtube.com/watch?v=BzMLA8YIgG0&feature=youtu.be …

Oh @Microsoft…you may have finally won this Apple-fangirl illustrator’s heart. Sigh, this is amazing. <3 #illustration#design#arthttps://twitter.com/WIRED/status/791638572080201728 …